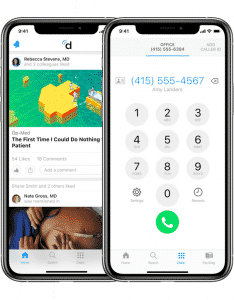 Over the next few months you will have the opportunity to read my article in Contemporary Pediatrics,  that details a “Battle Plan for Combating COVID-19”.  One of the topics discussed is the  importance of selecting the best Telehealth (TH) application/platform for your practice.  For many physicians and associate providers this is now a “no-brainer” as the Doximity Dialer Video application for IOS and Android smartphones was just released.  Not only is the application (a sub-application within the Doximity application itself) free of charge, it is probably the easiest to use of all the TH applications I have used.   Doximity provides a Business Associates Agreement to users, which permits practices to use the Doximity Dialer application as an official HIPAA compliant TH platform for their practice.

In the future Dr. Alperin indicates there will be a desktop version of the Doximity Video Dialer as well as a version for Tablets.  It’s great that Doximity has fast tracked the release of this essential tool during the COVID-19 pandemic when there has been a rush to integrate TH services into our practices.   We have more than enough to worry about.   If you trial the Doximity Video Dialer I am confident you will adopt it for your practice – because “it just works!” 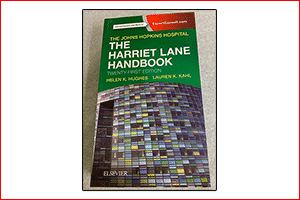 Every pediatrician is familiar with the Harriet Lane Handbook.  Long before the Internet and smart devices were available, pediatric residents were dependent on this “pocket brain” for guidance, and we called upon the wisdom contained within many times each day.  It provided valuable information about differential diagnosis, recommendations for workup, and drug dosages, and lots of other information!   It was as valuable as our stethoscopes, perhaps even more so, and we were ever so careful as not to misplace our Harriet Lane.   It was also filled with scribbles notes we accumulated through our 3 years of residency.

This quote from the preface to the 21st edition of the Handbook details its history:

“The Harriet Lane Handbook was first developed in 1953 after Harrison Spencer (chief resident in 1950–1951) suggested that residents should write a pocket-sized “pearl book.” As recounted by Henry Seidel, the first editor of The Harriet Lane Handbook, “Six of us began without funds and without [the] supervision of our elders, meeting sporadically around a table in the library of the Harriet Lane Home.” The product of their efforts was a concise yet comprehensive handbook that became an indispensable tool for the residents of the Harriet Lane Home. Ultimately, Robert Cooke (department chief, 1956–1974) realized the potential of the handbook, and, with his backing, the fifth edition was published for widespread distribution by Year Book. Since that time, the handbook has been regularly updated and rigorously revised to reflect the most up-to-date information and clinical guidelines available. It has grown from a humble Hopkins resident “pearl book” to become a nationally and internationally respected clinical resource. Now translated into many languages, the handbook is still intended as an easy-to-use manual to help pediatricians provide current and comprehensive pediatric care.” 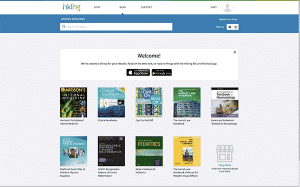 To this day the Harriet Lane Handbook is an indispensable resource for pediatricians in general practice and hospitalists as well.   The hardcopy of the Handbook sells for $50 and one gets free access to the inkling (https://www.inkling.com/read/) presentation of the Harriet Lane content via web site and via the inkling application.  Every 3 years a new edition is published, adding new content and updating existing content.  The next edition, is due in May of this year.

By the way, there is an “Easter egg” in the Handbook. One of the lab values reported in Harriet Lane does not exist, and this “secret” has been carried forward edition after edition.  If you are curious, email me at andrew.schuman@ymail.com for the answer! 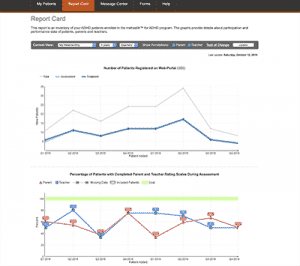 Mehealth for ADHD is an online tool for diagnosing ADHD in children and monitoring their treatment.   I’ve been using Mehealth for ADHD along with my practice colleagues for several years and have been extremely pleased the tool.  It facilitates diagnosis of ADHD by having parents and teachers fill out online Vanderbilt forms which are automatically scored. Consequently, evaluations are completed in just a few days.  Additionally, it allows pediatricians to monitor a child’s school performance while on medication or receiving behavior therapy- by requesting periodic follow up Vanderbilts from parents and teachers.

The system generates assessment reports and treatment graphs that one can share with parents and integrate into your electronic healthcare record (EHR), and also provides facilitated email communication with parents and teachers.  The online tool was developed by the Cincinnati Children’s Hospital Medical Center (CCHMC) in order to improve ADHD screening and management among community pediatricians. A randomized clinical trial showed dramatic improvements in ADHD care among practices using Mehealth for ADHD compared to control practices and a recent study demonstrated that practices treating children with medications who used Mehealth for ADHD had greater ADHD symptom reductions compared to controls.

CCHMC has secured NIH funding to recruit 5000 community pediatricians to adopt the online-tool to study how a variety of factors influence it use and utility. One simply goes to mehealth.com and enrolls. In addition to free access, users benefit by receiving 20 category 4 MOC credit for using tool each year.   Mehealth for ADHD recently expanded the tool by integrating online behavior treatments by parents and teachers that enable selection of daily and weekly rewards for achieving behavioral goals.

In the video, above, Dr. Tanya Froehlich, developmental-behavioral pediatrician at Cincinnati Children’s Hospital, presents an update on ADHD and why Mehealth for ADHD can improve the ability of pediatricians to diagnose and treat ADHD.

Here is a link to my 2017 video review of Mehealth for ADHD!

Also: Here are some videos provided by Mehealth for ADHD…. 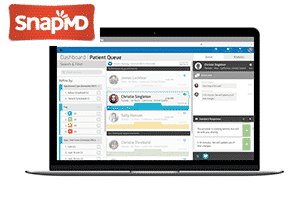 I recently presented a Technology workshop for 100 pediatricians at the American Academy of Pediatrics (AAP) National Conference in early November.  Among a lot of other great tech, we presented SnapMD as part of our brief Telehealth demonstration.  All attendees were impressed by the SnapMD platform, and those pediatricians who are considering implementing Telehealth visits would be well advised to consider SnapMD.

SnapMD was vetted by the AAP and selected as a Telehealth Technology Partner for the organization.  I’ve been told that the AAP was rigorous in the selection process and looked at many competitors.  If you are an AAP member, you can adopt SnapMD at a significant discount as one of the benefits of the AAP’s Member Advantage Program – see https://www.aap.org/en-us/my-aap/membership-information/discount-programs/Pages/Discount-Programs.aspx

In preparation for the workshop I received training from the staff of SnapMD and was truly impressed by the company and the platform.   At no charge SnapMD will configure the web-based portals for patients, practice administrators and providers with your practice logo and colors and setup the system to your liking.  Some practices may choose to have patients schedule their own Telehealth appointment or schedule an impromptu visit with the on-call pediatrician, while other practices may prefer having the patient call the office with the appointment made by the practice staff.

The video provides a brief overview of the platform.  There is a smartphone or tablet based application for patients to use (called Virtual Care), to facilitate scheduling and launching a visit. Patients can also use a web based portal to schedule or launch a visit and enter a “virtual waiting room”.  When the physician launches clicks a “start visit” button from inside the portal the visit begins. 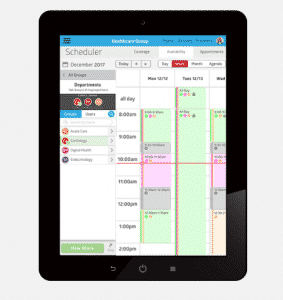 I think you will find the company passionate about their product and willing to answer any and all questions.

When the iPhone was released in 2007 it was hard to imagine the impact the device would have on our daily lives.   There are lots of medical applications and connected devices that have turned the iPhone into a versatile medical device.  Many of these I’ve reviewed previously on Medgizmos.

The ability to expedite calling of 911 was introduced in 2016 with  IOS 10.2. Surprisingly few people of aware of this feature and why created the above video.

In the settings tab click on Emergency SOS and enable Auto Call and select whether you’d like to enable the countdown sound (a siren). You can also click on Medical ID to record health information such as height, weight, medical conditions, allergies and medications.  By pressing the power button 5 times you activate the 911 call countdown which can be cancelled if it was accidentally begun.

Similarly you can configure your apple watch to auto call 911 in the watch settings application.  You press and hold the power button to initiate a 911 call.  The countdown alarm can also potentially frighten an assailant. Note that password protected iPhones give first responders access to your medical information that is recorded in your Medical ID application, just by pressing the button 5 times.

This feature is truly a potential lifesaver. Would recommend sharing with patients.

Google has also implemented a similar feature in the Android OS – please check the web for instructions.