Approximately 2.5% of all children have amblyopia, which is poor vision, typically in one eye, that occurs when the brain does not recognize the sight from that eye. If treatment does not start by age 7 years, amblyopia may never improve. Delayed detection of amblyopia leaves a child with permanent uncorrectable monocular vision loss that was potentially preventable.  Children with amblyopia are asymptomatic and remain undiagnosed and untreated unless they undergo vision screening.

Over the past 10 years, many pediatric practices have adopted instrument-based vision screeners, called photoscreeners, to identify children with amblyopia risk factors (ARFs) that predispose toward the development of amblyopia. These devices use an infrared camera that captures and analyzes images of the red reflex of undilated pupils to screen for refractive error (hyperopia or myopia), astigmatism (warped lens), anisometropia (significant refractive difference between eyes), strabismus (eye misalignment) and lens opacity. According to AAP guidelines, a visual acuity screen is recommended at ages 4 and 5 years, as well as in cooperative 3-year-olds. Additionally, instrument-based screening may be used at ages 12 and 24 months, as well as at ages 3 through 5 years. Visual acuity screening should also be performed by pediatricians at ages 6, 8, 10, 12, and 15 years and anytime vision problems are suspected.

Although photoscreening in pediatric practice has improved the number of children diagnosed with and treated for amblyopia, this technology has limitations and has not evolved since its introduction over a decade ago. Because the incidence of ARFs is 1 in 5 children, and the incidence of amblyopia is 1 in 40 children, only about 1 in the 8 children with risk factors who undergo a thorough examination by an ophthalmologist will be diagnosed with amblyopia. Additionally, many pediatricians and ophthalmologists report that only 38 to 48% of patients who are referred following photoscreening actually make appointments for follow up.

David Hunter, MD, PHD, is the Ophthalmologist-in-Chief at Boston Children’s Hospital, Massachusetts. He has spent more than 15 years developing a new technology for detecting amblyopia and strabismus in young children. This technology is called retinal polarization scanning (RPS), and the prototype device using the technology was originally called the Pediatric Vision Scanner. He formed Rebion (formerly REBIScan) in 2009 to commercialize the device, and the final version, recently released, has been appropriately named “blinq.”. 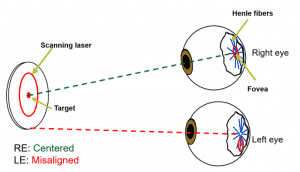 The technology is based on the fact that when one eye has diminished vision, the brain cannot align both eyes to achieve stable binocular fixation. When polarized light is projected on the nerve fibers surrounding the fovea (the area of the retina responsible for central vision), these fibers change the polarization of light projected onto this area. The blinq device projects a beam of polarized light onto the retina while the child focuses on a light target 14 inches away, and the changes from the light reflected by the fovea of each eye are analyzed by the device. 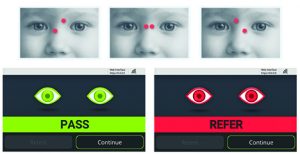 The device can detect as little as 1 degree of strabismus. In contrast, at least 8 degrees of strabismus must be present before it can be detected visually by a non-ophthalmologist. Although photoscreeners provide a readout indicating that strabismus is present, they also require at least 8 degrees of strabismus, the same as what can be detected visually by parents or pediatricians. Independent comparative studies have shown excellent sensitivity (97%) and specificity (87%) of the blinq prototype for detection of amblyopia or strabismus.

The device sells for $8995 and comes with a 1-year warranty. Rebion suggests users bill insurance companies using the CPT code 0469T : “retinal polarization scan, ocular screening with on-site automated results bilateral.” By my estimates, if insurance companies reimburse $25 per test, the device will pay for itself after 360 screens, which for many practices can be easily achieved in 6 to 12 months’ time. It is possible that the test may be reimbursed at a higher rate. See the video above for more details!

See videos below for an interview with Justin Shaka, CEO of Rebion, and Dr. Hunter, inventor of the blinq!