The CLIA’ 88 regulations, were published in 1992 and phased in through 1994.  Over the years they’ve had a dramatic impact on primary care medical practice.  Before their implementation primary care physicians could perform urine and throat cultures in their office, spin hematocrits, and perform a modified CBC using a neat device called the QBC Star.  CLIA’ 88 took all this away as most small practices could not afford to maintain a “moderately” complex lab.  Eventually, devices began to emerge that gained FDA approved CLIA ’88 waived status.  The first in my memory was the Hemacue for determining Hemoglobin levels, and then rapid diagnostic tests for strep A detection followed shortly thereafter. 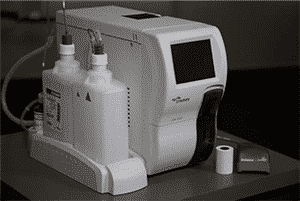 We’ve had no  point of care, waived CBC device in the US until this year!  Sysmex corporation based in Japan and world leader in hematology analyzers modified their highly successful PocH-100i tabletop analyzer and introduced the Clia’88 waived XW-100 hematology analyzer several months ago.

Having a CBC test in office can help physicians make important decisions regarding the need for antibiotics or further testing.  In the setting of treating febrile patients, especially children, a normal or a CBC which a predominance of lymphocytes can be reassuring,.  In contrast, an elevated CBC may suggest that more attention need to be taken when a source of infection is not evident.

As shown in the video the XW-100 is easy to setup and use. Effectively it is fully automated, and users simply follow on screen instructions.  The machine attaches to reagents and an exhaust reservoir.  The device requires 3 controls be run every 8 hours, a process which takes about 20 to 30 minutes.   Venous specimens take just 3 minutes to run, and results are printed on a thermal printout with normal values for age accompanying the results.

It is slightly noisy during operation, but it is nice to be able to run CBCs in the office rather than send patients to the local hospital for testing, and then calling with results after they have left the office. 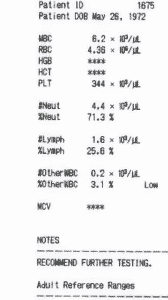 The FDA has approved the XW-100 device for “non-critically” ill patients 2 years and above and can only be run on venous (not finger stick) samples.   The FDA also limits the XW-100 device in that results are suppressed if the platelet count is below 100,000 , the hemoglobin is below 10, or when the white blood count is below 3000, requiring a physician to obtain a specimen at a hospital lab.  Hopefully as more waived CBC devices become available, the FDA will relax their restrictions.