Back in the day…. 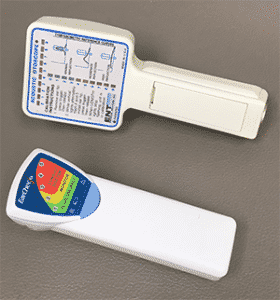 Not all helpful medical gizmos survive the test of time. Such is the case of the “Acoustic Otoscope”  (also called the “Spectral Gradient Angle Reflectometer”) which was introduced in the early 1980s as an alternative to tympanometry to detect the presence of fluid behind the tympanic membrane.  The Acoustic Otoscope was inexpensive (hundreds of dollars) compared to tympanometry devices (thousands of dollars). Best of all it was easy to use and did not require  a seal to produce a measurement (this can be problematic with tympanometry devices), and displayed results in seconds. Numerous studies showed comparable sensitivity for detection of middle ear fluid.  It was particularly helpful when the tympanic membrane was obscured by cerumen.  A normal reading with this device, made otitis media unlikely, and played an important role in avoiding the inappropriate prescribing of antibiotics.

While many pediatricians used the device, and it remained popular for many years, companies that manufactured the EarCheck Pro (the last incarnation of the Acoustic Otoscope) could never sell enough of them to sustain its use. Once purchased the device could be used for years. In an effort to continue to generate revenue the manufacturer sold disposable plastic tips because they said these should be replaced, but pediatricians in large measure did not replace the tips. There was also a consumer version, called the EarCheck (shown in the video), with the same internals as the more expensive professional device.  Unfortunately, few parents bought this version of the acoustic otoscope.

It’s such a shame that the acoustic otoscope did not find its niche in the market as it was extremely useful, as few pediatricians have tympanometry devices in their offices these days. It would help guide management of serous otitis, and reduce referrals for myringotomy tubes.

If you have some older devices hanging around your office considering donating these to Medgizmos, so we can present a review similar to this one!