. Otoacoustic emissions can be used as a screening test for any age. The technology is especially convenient with infants and toddlers, for whom audiometry can be difficult or impossible to perform. It is also helpful in deciding if surgical management is needed for bilateral middle ear effusion of longer than 3 months’ duration.

When sound enters the ear canal, the tympanic membrane vibrates and the middle ear ossicular chain transmits the sound to the cochlea. The sound waves in the cochlea excite the outer hair cells and a backwash of sound energy–otoacoustic emissions (OAEs)–travels in the reverse direction, from the cochlea through the middle ear into the ear canal. In an abnormal ear, the intensity of the emissions is much weaker than in a normal ear.

Transient OAEs are produced by the outer hair cells of the cochlea when a “click” sound stimulus is presented to the ear. In contrast, distortion product otoacoustic emissions (DPOAEs) are the emissions produced by the outer hair cells in the cochlea when sound stimulus is provided by the simultaneous presentation of 2 pure tones of equal intensity but different frequencies. In either situation, an OAE screening instrument, using a sensitive microphone in the ear canal, assigns a pass or fail grade for the child’s hearing based on an algorithm stored in memory. 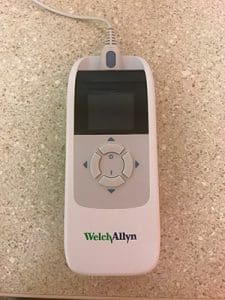 Otoacoustic emissions screeners test hearing at 2, 3, 4, and 5 kHz in a matter of minutes. An infant or child who “refers” should be examined for evidence of ear canal obstruction with cerumen, otitis media, or serous otitis, with treatment as indicated. In the absence of a treatable cause, or watchful waiting in the case of a serous otitis, repeat testing should occur in 2 to 4 weeks’ time, and if there is no improvement, the child should be referred to a pediatric audiologistPediatricians should screen children for hearing problems throughout childhood as per the Bright Futures guidelines. This means screening children at ages 4, 5, 6, 8, and 10 years and whenever risk factors are identified. Additionally, those children who are being monitored for developmental delays or speech problems also should be subjected to hearing screening.

The Welch Allyn Hearing Screener is a very basic OAE screener. Advantage include low cost of acquisition (around $4000) the color screen (albeit small compared to other models), and the  probe fit and repositioning screening, which launches the test automatically.  Overall for pediatricians I like cartoon based OAE screeners (this model does not have a cartoon screen!) which keep kids cooperative for screening (see other reviews on Medgizmos).