For  many years physicians have used lateral flow immunoassay technology for the rapid diagnosis of strep, influenza and respiratory influenza viruses.  These are available in strips and cartridges and have been a mainstay of rapid diagnosis tech in the office.  Their advantage is that they are CLIA waived, very affordable and in the case of strep tests are reasonably sensitive.  In a recent meta-analysis point of care (poc) strep tests have a sensitivity of 86% (Lean WL, Arnup S, Danchin M, Steer AC. 2014. Rapid diagnostic tests for group A streptococcal pharyngitis: a meta-analysis. Pediatrics 134: 771–781. http://dx.doi.org/10.1542/peds.2014-1094).   Many organizations such as the American Academy of Pediatrics and the Infectious Disease Society of America recommends that all negative poc strep tests be backed up with culture.
Testing involves obtaining a swab specimen – pharyngeal swab in the case of strep and nasal or nasopharyngeal in the case of influenza.  Several drops of  reagents are placed in a tube and the swab inserted.  The specimen  undergoes a several minute elution process and then a test strip is placed into the mixture or several specimen drops are placed into the sample well in a cartridge.  By capillary action the liquid containing the antigen travels up the strip or cartridge. 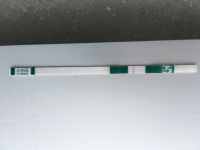 Now this is where the “magic” happens.  Test antigen antibodies attached to a colored latex or metallic “nanoparticles” are fixed along the test surface. In addition a control area, onto which is fixed antibodies to the antigen-antibody complex, also attached to a colored latex or metallic colored nanoparticles.  Thus if antigen is present in the test area a line is produced.   Additionally a control line also appears showing that the test is valid.

The problem with the tech: You need a certain concentration of antibody-antigen complex to be visible to the human eye. Thus each device has a “level of detection” that requires a certain amount of antigen to indicate a positive test.  For strep tests, as mentioned previously, the sensitivity overall is 86% compared to culture , although some tests are better than others and recorded sensitivities compared to culture in the 93% range.  However for influenza testing, the sensitivities of these tests are abysmal, with sensitivities in the neighborhood of  60%, often less.

A few years back Veritor introduced an optical reader into the mix.   The Veritor assays are much more accurate than traditional lateral flow assays and just a tad bit more expensive.  For most practices the Veritor system is ideal as it is affordable, fast, and more accurate for strep, influenza, and RSV compared to our traditional lateral flow tech.  They recently introduced a new reader with wireless capability, that works with it’s current cartridges, and features a walk-a-way mode, can scan bar codes, and potentially integrate with popular EHRs.

Watch the video to see our “Table Top” Tech review of the Veritor system.